Color and History
Color is emblematic of time. In the same way that fashion, art and technology play a role in signifying cultural periods, color also tells a story of time. From multi-color schemes of Victorian homes to the pinks, reds, golds and geometric patterns of the Art Deco era, and beyond, color is closely tied to distinct architectural styles, therefore, possessing the ability to transport us to different periods in time. 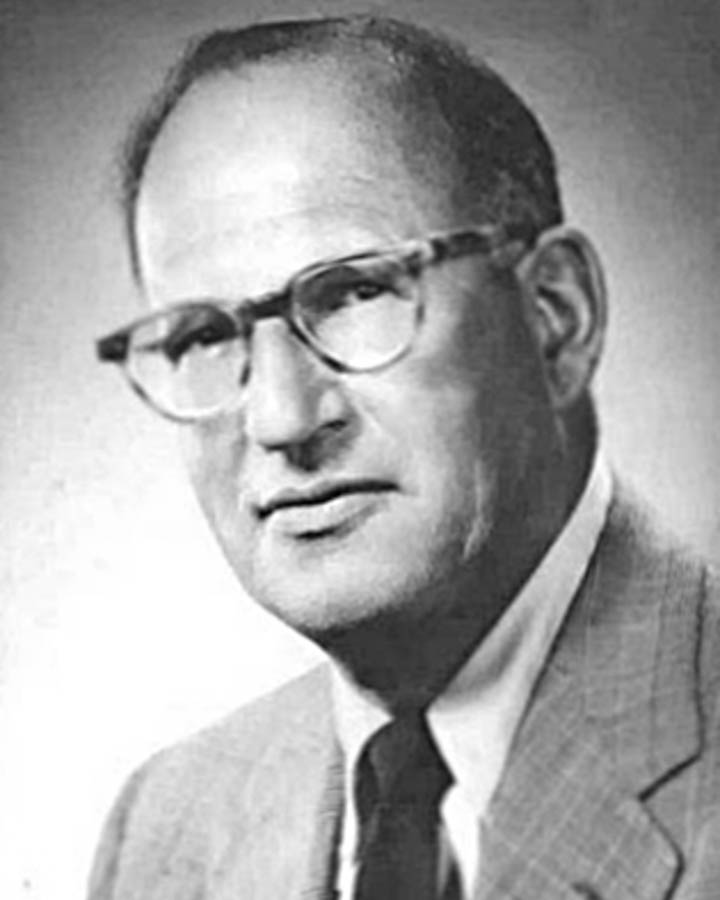 To honor human connection to color, Dunn-Edwards Paints created the Then, Now, and Forever® collection of 142 historically-accurate paint colors and 158 trending paint colors, all of which tell a story of styles and trends from eras ranging from the 1800s to the present day. The historically-accurate colors of the collection were developed based on paint samples from historic architecture throughout the American West and historic resources such as Joseph Eichler’s Phillips House in Granada Hills, California. To carefully collect, match, and verify color samples for the collection, Dunn-Edwards worked with Architectural Resources Group (ARG), a collective of architects, planners and conservators who believe in the value of historical buildings, to collect, match, and verify these historic paint colors. 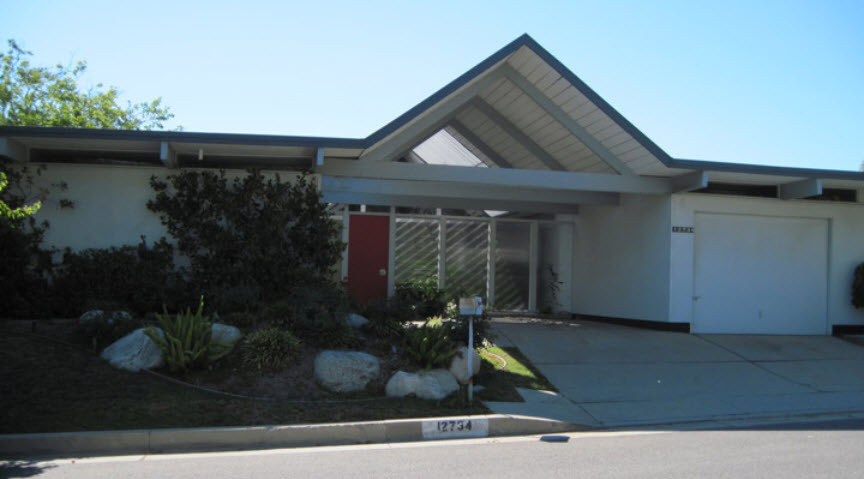 About Mid-century Modern Architecture
One such historic resource used to craft our historically-accurate line of colors for the Mid-century Modern era was Joseph Eichler’s Phillips House. The Phillips House is an example of architecture in the Mid-century Modern movement. Mid-century Modern describes an artistic period in the middle of the 20th-century, largely defined from the 1940s to the mid-1960s, which included new ideals on art, graphic design, furniture and architecture. The period bore an emphasis on uncluttered sleek lines, affordability and functionality over decoration and form.New products developed during World War II influenced homes and furniture built in the 1950s and 60s. As a result, homes featured materials such as formica countertops, plywood cabinets and plastic. A sense of optimism after the end of the war brought about a renewed focus on everyday civilian life, technologies, the arts and design style. 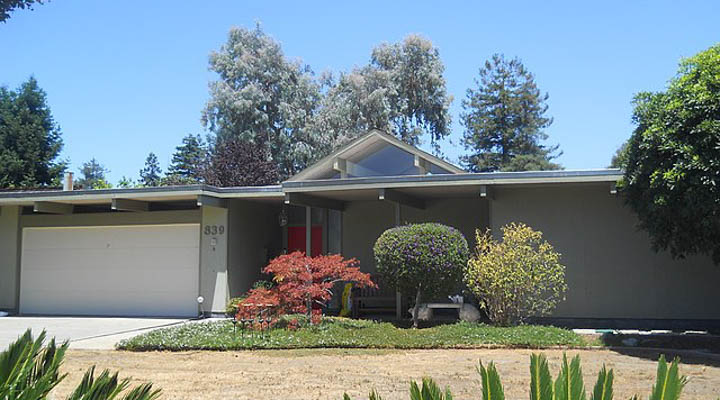 Joseph Eichler built most prolifically in Northern California. An example of one of his homes located in Sunnyvale, Ca.

Joseph Eichler’s Influence on Mid-century Modernism
We’ve noted before how icons of the Mid-century Modern architecture are notable sources for our Then, Now, and Forever® collection. Among these prominent building developers is Joseph Eichler who built 11,000 homes throughout California in the middle of the last century. Inspired by the Frank Lloyd Wright home his family inhabited one summer during WWII, Eichler strove to build homes en masse that incorporated similar features including open spaces, simple lines and lots of windows.

Using the plans of architects Jones & Emmons and Claude Oakland, Eichler built an entire neighborhood between 1962 and 1964 in the northern end of Los Angeles’ San Fernando Valley, an area of Granada Hills called the Balboa Highlands. The Balboa Highlands Tract includes 108 Eichler-built homes, including the Phillips House.

These homes were built in a style not frequently seen previously by the masses. Bedrooms were divided among two separate wings that sprouted from a central atrium and the center of the house focused on communal gathering spaces like the kitchen, dining and living areas. Each wing included bedrooms and its own bathroom, which allowed greater privacy between parents and children. The central atrium took advantage of the West’s temperate weather and great light, as well as being a space for the family to congregate, connecting with one another and the nature around them. Eichler’s subdivisions made this modern layout accessible to the typical American family. 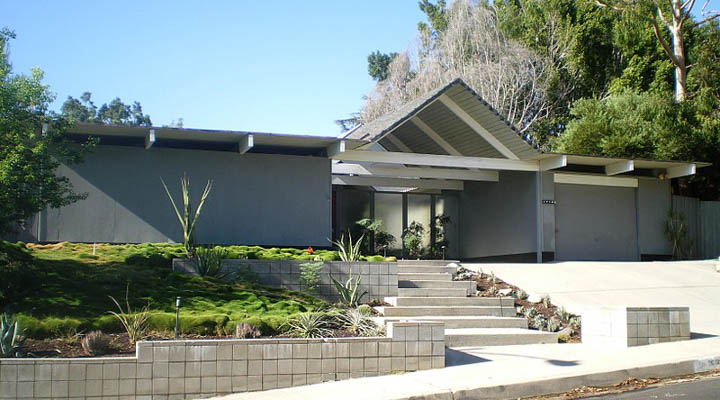 Further, Balboa Highland’s Mid-century Modern architectural pedigree earned it a historic designation. Eichler strove to build affordable, stylish, and well-crafted homes for moderate to working-class families. Perhaps as groundbreaking as the style that he championed was the fact that he welcomed the idea, according to the L.A. Conservancy, that people of all races and religious affiliations should be able to own an Eichler home, not always a popular sentiment at the time.

Historic Preservation advocate and Balboa Highlands resident Adrienne Biondo recalls that her African American neighbors originally chose the neighborhood because of Eichler’s outspoken nondiscrimination policy. Eichler would go so far as to buy the house back from minority homeowners should they encounter issues with their neighbors and decide not to stay, according to NPR.

The Phillips House is one prime example of Eichler’s Mid-century Modern work, and Dunn-Edwards Paints, with the help of ARG, have recreated paint colors original to this home in Joseph Eichler’s only Los Angeles County subdivision. 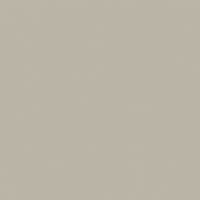 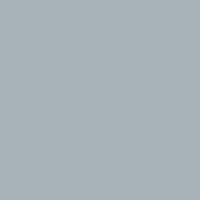 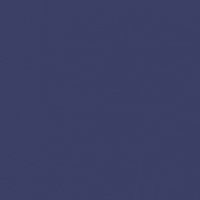 Clematis Blue (DET587)
This dark violet-blue hue is named after the flower of the Clematis flower that blooms in gardens alongside shrubs, plants, and perennials. It is the darkest color found on the exterior of the Phillips House.

Yreka! (DET594)
This misty, green-tinged gray was originally found on the Yreka Church Rectory, a Victorian-Stick building in Yreka, California. The color representation was also discovered on the exterior of the Eichler-built Phillips House.

Pewter Patter (DET627)
A softened pewter gray, this color was also found on the exterior of the Phillips House in the Granada Hills, California. 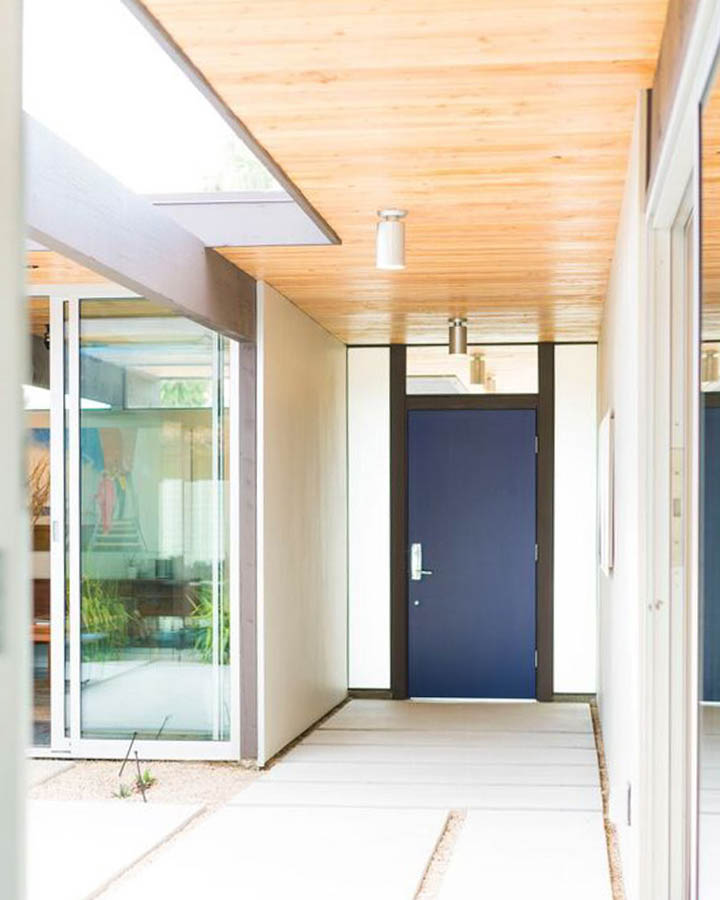 As a way to honor the heritage of Eichler homes, these very same colors were also utilized in the color palette of Kud Properties’ recently updated Desert Eichler homes in Palm Springs, California.

Interested in other examples of how paint helps impact Mid-century design? Read on about the Cliff May house and how the architect worked with Dunn-Edwards in the 1950s on his own collection of paint colors. Or take a look at the Schindler-Grokowsky house in South Pasadena, a very early example of Modernist design in the making.