Looking back now, Janie Rochfort laughs at herself for believing that if she were to pursue artistic endeavors, she’d never make a living. The founder of the multidisciplinary Betty Larkin design studio says if only she knew then what she knows now, she’d have approached things differently. But she wouldn’t trade that special moment when it all came together for her. Her epiphany came on a beautiful, breezy day driving around her hometown of San Diego, when she passed Underbelly, a ramen restaurant with a boldly designed space. Looking into the building, she could see custom-designed furniture. Vertical wood slats artistically ran up a wall behind the main bar area. Large glass windows flipped open, creating a tabletop where diners inside and outside on the patio could share a space to eat. 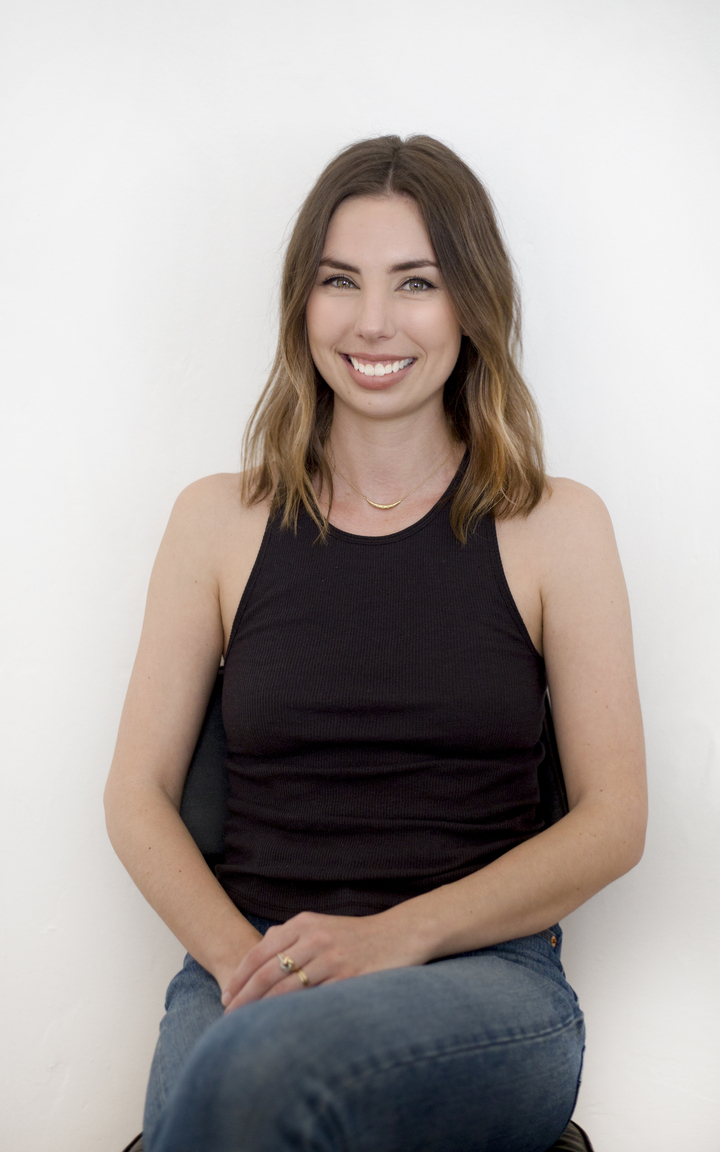 “The space combines furniture making and woodworking with interior design and architecture and a little bit of art … and that’s how I figured out how to find this all-encompassing discipline,” she stated.

Later, thinking of her journey as a multitalented studio artist, architect and interior designer, Rochfort’s memory bounces back to the namesake of her studio, her grandmother Betty Larkin, whose lust for languages, learning and travel inspired Rochfort to pursue art and education. “She was a huge inspiration for me and a big reason why I decided to go to architecture school. This is just kind of a nod to her and her legacy,” she reminisced. 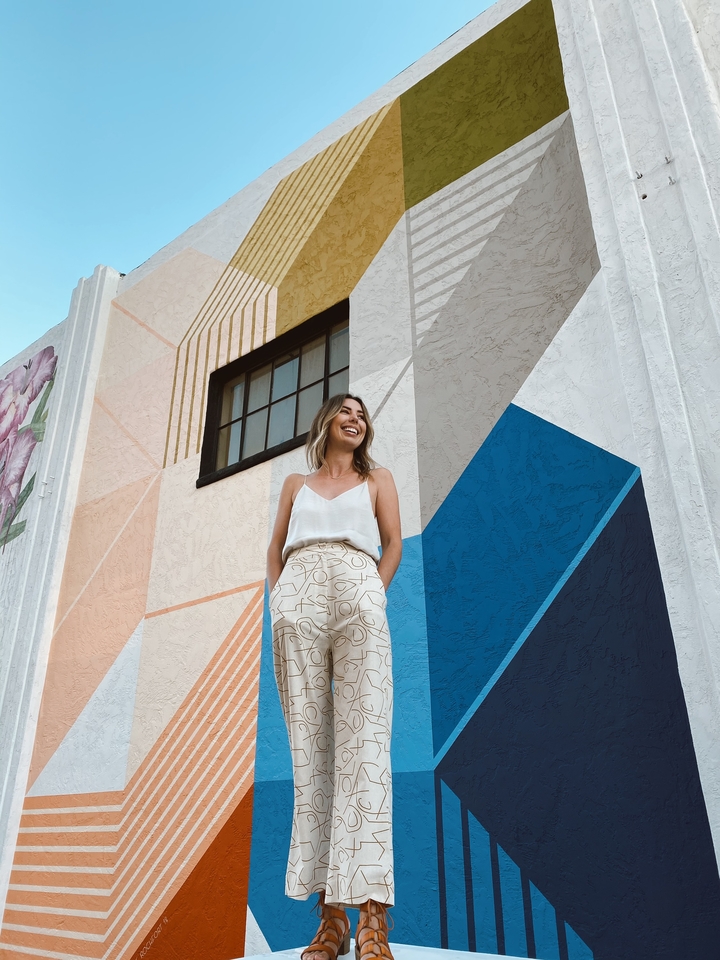 Betty Larkin, the studio, encompasses all of the design work Rochfort creates — from her art prints to the murals she’s completed for clients like the CBS reality show Love Island and the Bay Area headquarters of lifestyle and home décor magazine Lonny. In addition to being a muralist, Rochfort also brings her interior design skills to commercial and residential buildings, combining a love for all things design. “I’ve never wanted to just do one thing.”

Since her childhood days, Rochfort’s had an urge to design and create, sketching whenever she could. Growing up, a path in art seemed to make the most sense, until she grew concerned about financial prospects as an artist. So she transferred from a studio art major at UCLA to UCLA’s School of the Arts and Architecture, as it seemed to present a path to a more lucrative career — and one that honored both her logical and creative side. 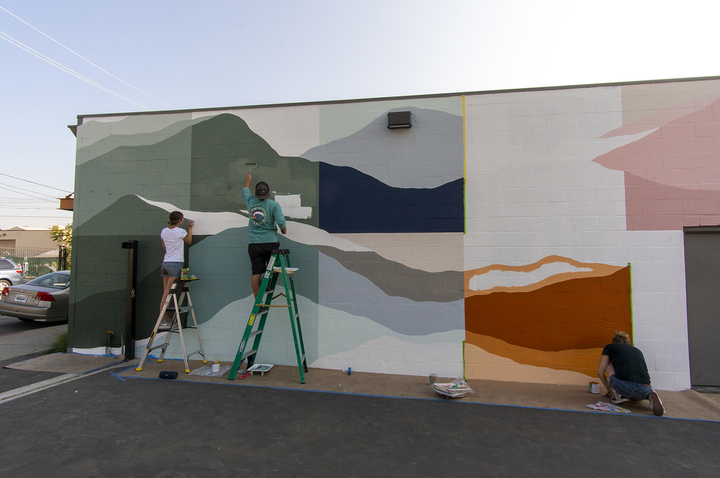 Now, as an adult seven years post-architecture school, the artist does not believe in rules when it comes to choosing color, creativity or career paths. In fact, one of the things that surprises Rochfort is how her fellow classmates from architecture school have run in their own individual directions with their training, applying it to different career types. In fact, simply knowing that design school can lead to varying fields is the piece of advice she’d extend to current students. “[Architectural] training will give you a good way of thinking about design and problem-solving, but it can be applied to so many different fields, and just because you go to architecture school doesn’t mean you have to pursue your architecture license,” she stated.

For Rochfort, training in architecture school was rigorous, yes, but also eye-opening. “School introduced me to architecture as a humanitarian discipline and thinking about form and space and setting.” It’s this aspect of design that she sees being applied across mediums and disciplines. In fact, a former architecture colleague of hers is building parklets, creating outdoor spaces for businesses to accommodate COVID-distancing measures. And they’re being built with repurposed materials, adding an environmentally-conscious component to the project, furthering its humanitarian focus. 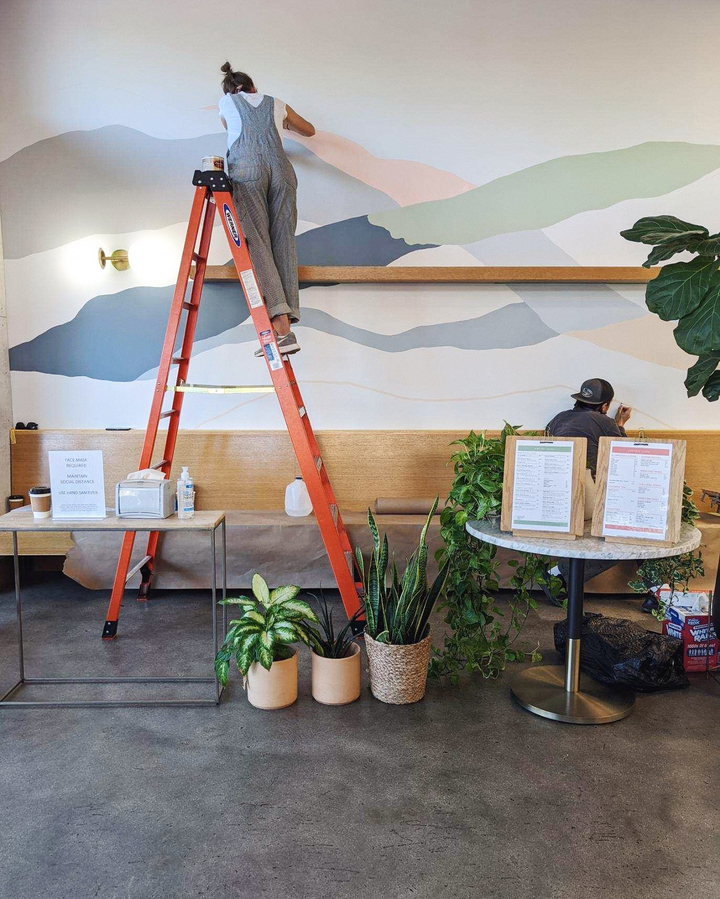 Rochfort’s unbridled spirit extends to her view on playing with color. When asked if certain colors are more appropriate for some spaces than others, she’s quick to reply, “I don’t think there are strict rules. For the artist, color is an expression of how we view the world and, outside of choosing the right sheen for the particular application and setting, the artist likes breaking with norms."

Her own color palettes are informed by her love of calming, uncluttered Scandinavian design and surprising color pops. When working on mural projects, Rochfort takes a holistic view of the space and forms a cohesive feel with her art. She partners with interior designers and architects, looking at the fabric swatches, colors and textures they are planning to use in the space. From there, she pulls inspiration from those pieces, integrating her color palette within the overall design. 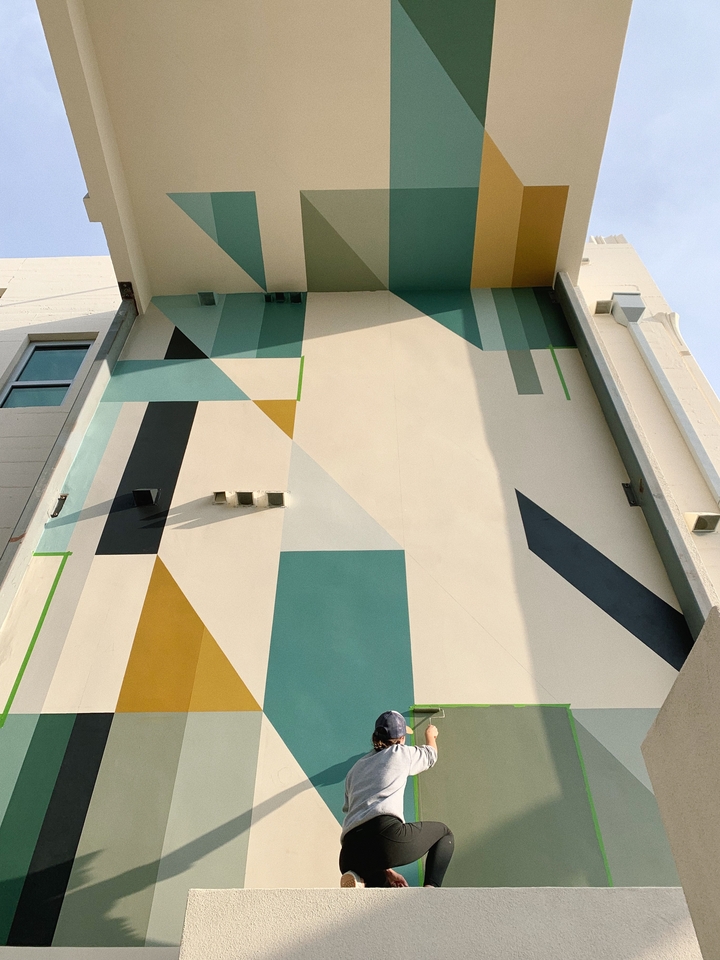 A fan of neutrals, Rochfort calls Secluded Canyon (DE5186), a terracotta shade, one of her favorite hues. She often pairs such colors with more saturated hues like Cornflower (DE5864) blue, a color she enthusiastically describes as ‘vivid and rich.’ And because Dunn-Edwards has 2,006 colors from which to choose, she typically relies on shades within the same color family to help her round out a fluid palette. “Dunn-Edwards has the perfect variety, meaning I don’t have to [mix new colors], which is nice,” she stated.

While in school, Rochfort learned about color theory and history, but faced a learning curve when she entered the professional world. For example, she had to learn computer-aided design, or CAD, software on her own. How’d she do that? She assigned herself little projects she could do using the program like drawing out the floor plan of her apartment, then later drawing a 3D model in SketchUp. With each project, she became more and more adept at using the software, a standard for the architecture world.

That software knowledge comes in handy for the artist when she’s building large-scale murals, which can cover anywhere from a 10-foot-long restaurant wall to the entire exterior side of a building. Rochfort first
designs a CAD rendering of the elevations, making shapes to scale. Then armed with only a tape measure, a level and some masking tape, she creates patterns and shapes to scale on the wall. She then relies on a team of painting assistants to help with the mural install. 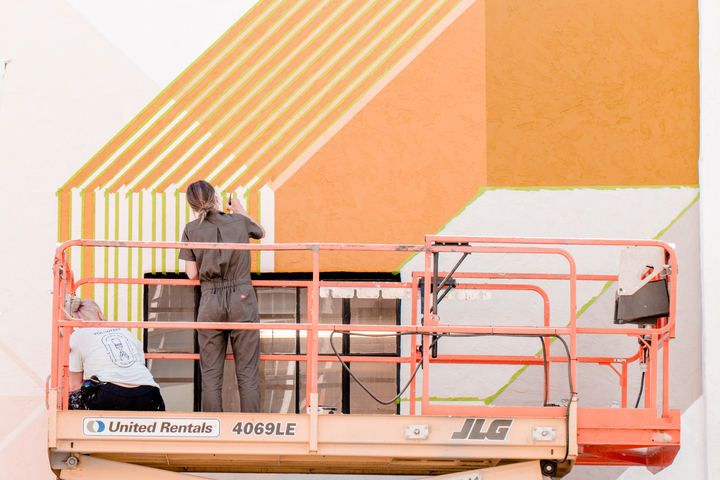 She’s painted large-scale murals all over San Diego, each one fitting her ethos of geometric shapes and laid-back color palettes with pop of more vivid hues. Take the mural she completed for San Diego’s Ladies Who Paint mural festival, where she incorporated geometric shapes in yellows, blues, chartreuse and oranges. She’s played with tan hues in LEO, San Diego’s nail and massage spa, and organic shapes for Communal Coffee, Acorns and Coffee & Tea Collective.

As a part of her design journey, the artist feels lucky to have met a mentor during her time working at Moniker Group, a self-described dream factory in the design and hospitality space. Rochfort’s mentor taught her a valuable lesson — It’s not just enough to think of the design; it’s important to think about how the item will be fabricated. One of the most startling things she learned outside of architecture school was the disconnect between architects designing something without thinking through the materials and fabrication of the design.

It’s only now that Rochfort can connect the dots and see how her hands-on experience at Moniker Group, with its fabrication studio and the woodworking classes she took, would set the groundwork for her epiphany
moment at Underbelly. 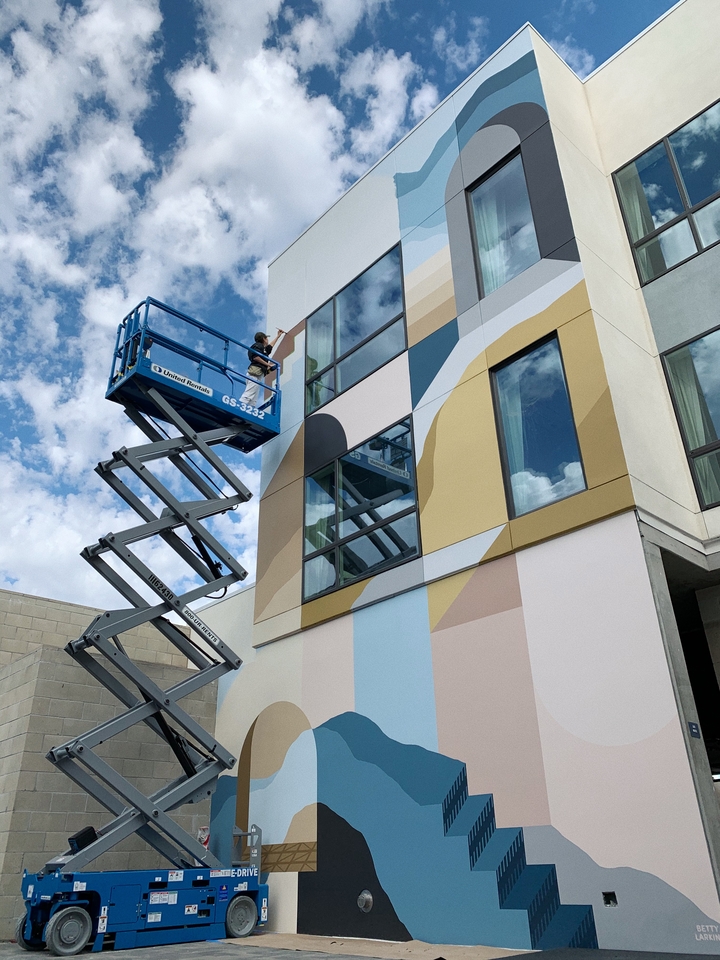 Since starting Betty Larkin in 2018, Rochfort has faced challenges like nonoptimal working conditions. She describes showing up at a work site and staring down scaffolding that featured an impossible ladder
to climb. Instead, she chose to rent a lift to safely complete the project, which resulted in unforeseen delays and costs. Her lesson? Check firsthand if the work site is actually ready before agreeing to start work. But challenges like that have forced her to cultivate a sense of adaptability. The success of her projects, she notes, stems from “just always having a Plan B for every single job...As lame as it sounds, expect the unexpected because the unexpected is always going to happen,” she stated. It’s that learning that helps Rochfort maintain her go-with-the-flow attitude on projects today. 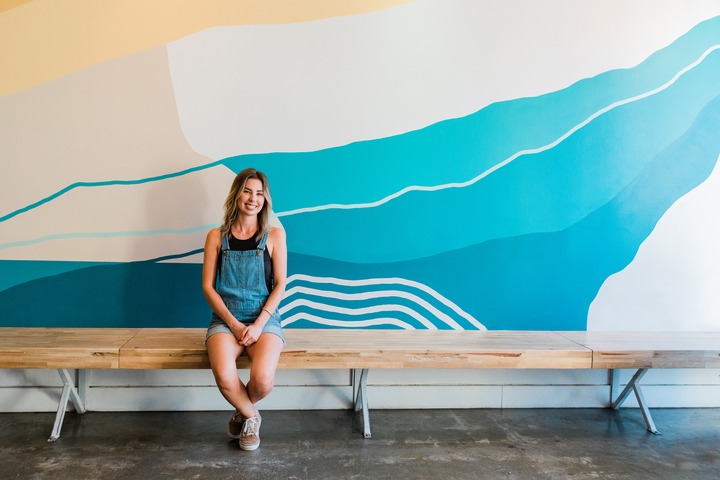 With her design studio, Betty Larkin, Rochfort seems to be on a mission. A mission that echoes the most quintessential advice an artist gives to students— that an architecture degree can open possibilities for all sorts of career paths. Since founding her studio, she has done a variety of project types. She’s designed the interiors of a vintage home in San Diego, Calif., as well as an ice cream parlor. She’s worked on murals for businesses and festivals, alike, and she also creates and sells prints of her paintings. With all of these endeavors, along with projects soon to come — like a mural for a newly built hotel on San Francisco’s Fisherman’s Wharf — we know the real Betty Larkin would be proud of her granddaughter’s path.

All images courtesy of Janie Rochfort