“Good design doesn’t have to be expensive and often it will lead to better solutions,” stated Alexis Navarro, explaining his philosophy behind architecture and the creation of his latest accessory dwelling unit, or ADU located in East Los Angeles, Calif. 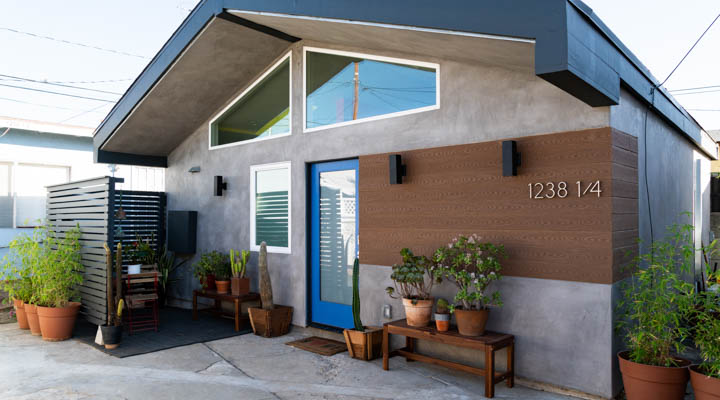 There’s been a recent rise in ADU building, fueled in part by the COVID-19 pandemic and the need families have for more space. We’ve covered the recent boom with property owners building ADUs in their backyards for a host of reasons; sometimes to gain rental income and/or to offset their own mortgage, other times to gain more private space, especially as families round a year of quarantining together at home. 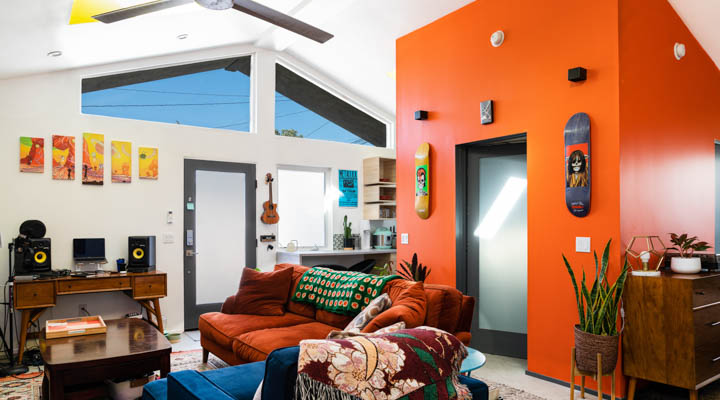 Navarro, Principal of ANDesign, llc and professor of architecture at East L.A. College, was inspired to build a flexible, private living space at an affordable price when he learned that tenants in his recently-purchased triplex were sleeping in the living room because the bedroom only fit their child’s bed. “I was disheartened. I made it my challenge to design a small low-cost house with efficient and intelligent design amenities that was affordable,” stated Navarro, whose project was recently featured in the Los Angeles Times. The architect knew that such a challenge would force him to develop a better living solution. 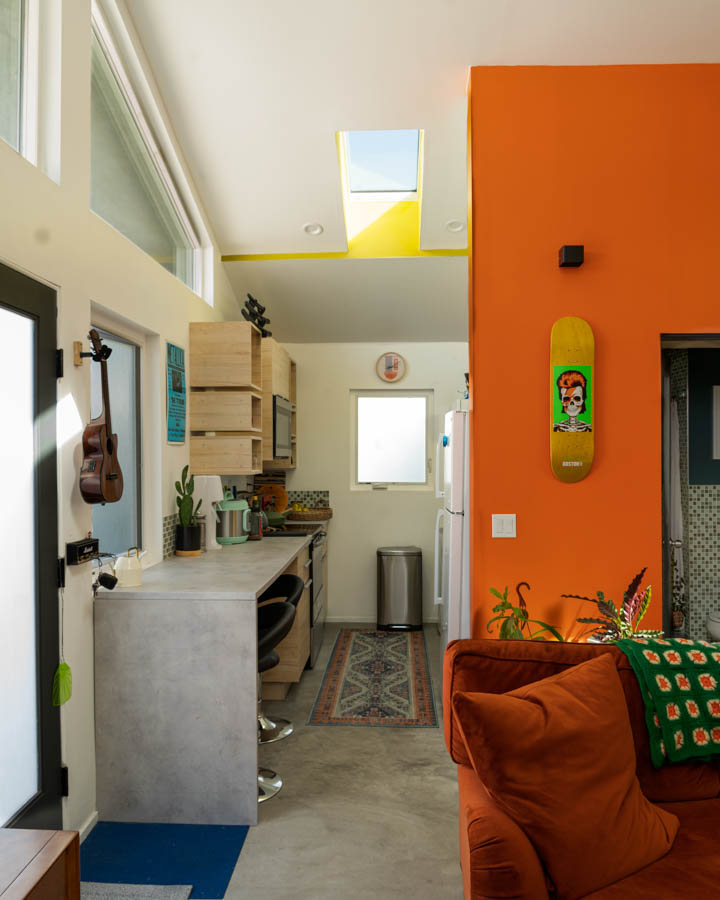 The ADU, which Navarro dubbed “Casita LA,” is a 536-square-foot studio with flexible open kitchen, living space, bedroom alcove and a bathroom. It also includes its own in-unit laundry. Navarro, who formerly worked at Richard Meier & Partners Architects, served not only as architect on the project, but as general contractor, in order to keep costs down.

He brought in sub-contractors for the build where needed. Another key to keeping costs manageable on his ADU build were the off-the-shelf items for plumbing, electrical and kitchen accessories from retailers like Ikea, Home Depot and HD Supply. Building "Casita LA" with available materials enabled Navarro to keep the total cost of the build below $100,000. 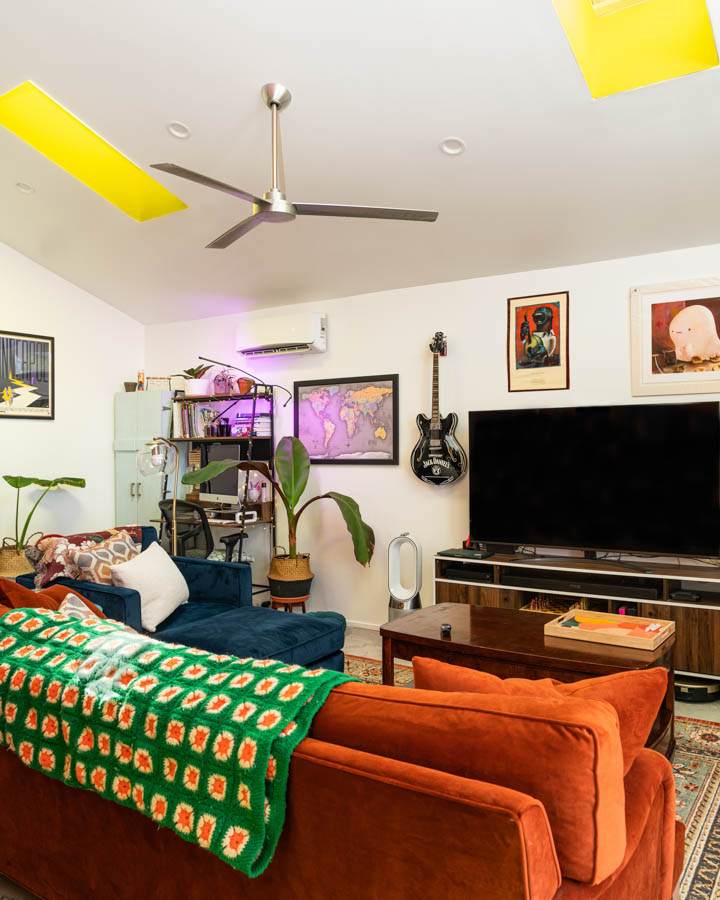 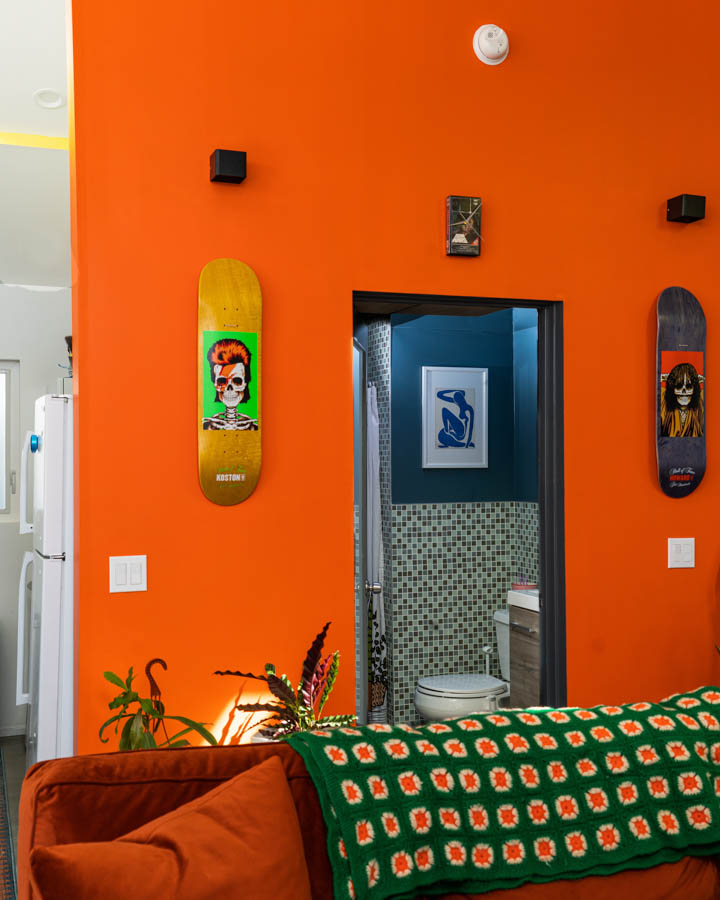 Navarro chose to build the ADU in the Mid-century post-and-beam style that allows for high ceilings and clerestory windows, all of which promote natural light while maintaining privacy and creating the illusion of space. In an effort to further these ideas, Navarro also installed three skylights that bring even more natural light into the space. 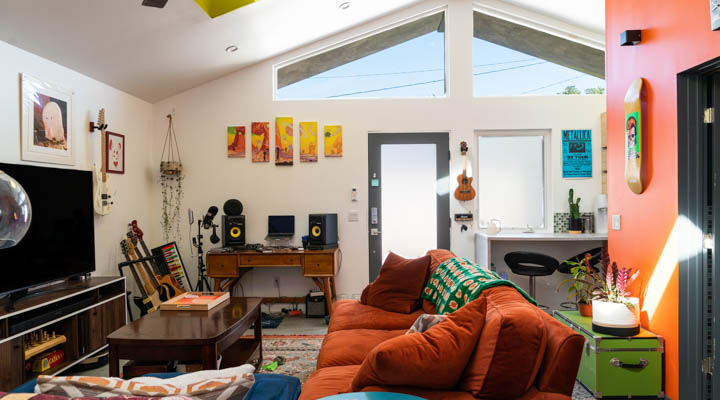 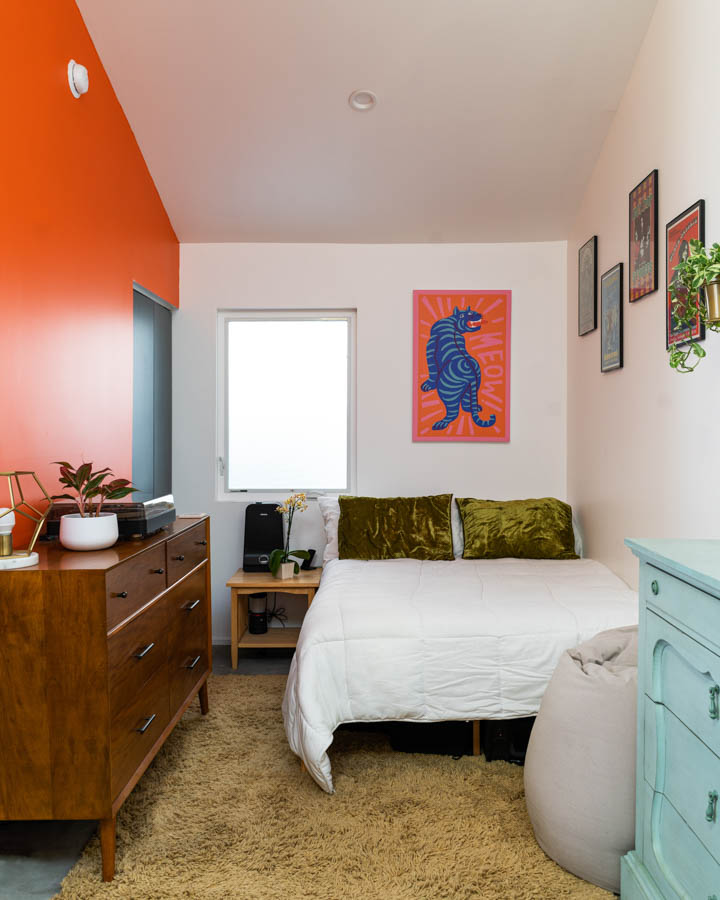 The design of the building informed his choices on paint; while he kept most interior walls neutral to keep a sense of airiness, he defined the bathroom area with Orange Burst (DEA113) and the skylights with bright yellow Chickadee (DE5403). “The sunny yellow color edges of the skylights bring attention to the profusion of light that is introduced and changes in the intensity of yellow as the changing sun light of the day and seasons,” he explained. Navarro believes paint colors are a defining aspect of the space and a key in overcoming the ADU’s position in a high-density neighborhood, particularly high-density lot (Navarro owns a triplex on the same lot). “It was important to not only introduce as much light as possible, but by using bold colors I was able to create an interior environment that completely overpowers one’s perception or memory of the very limited interior and exterior limitations,” he stated. 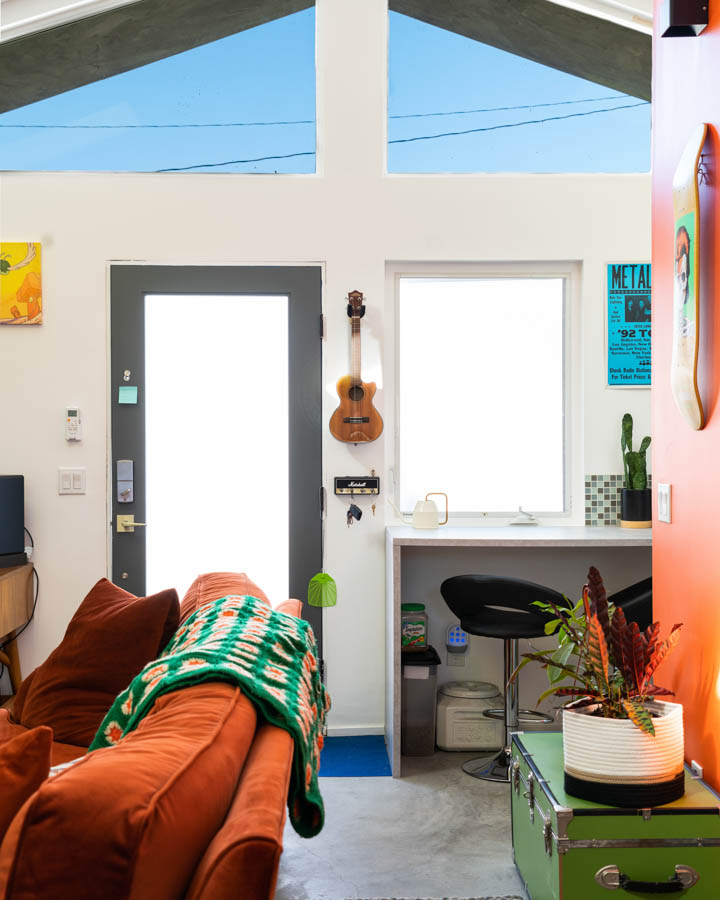 It was also Navarro’s bold use of color that prompted rental inquiries for the ADU to pour in. “Inquiries came from as far away as Thailand and New York,” he stated. “The demand for renting it out was very high and some offered to pay a higher rent [then I was asking].” Completing the interior palette is Pointed Rock (DE6363) for the interior doors. Indeed, the new tenants explain it was the colors which had them desperate to call the ADU their home. 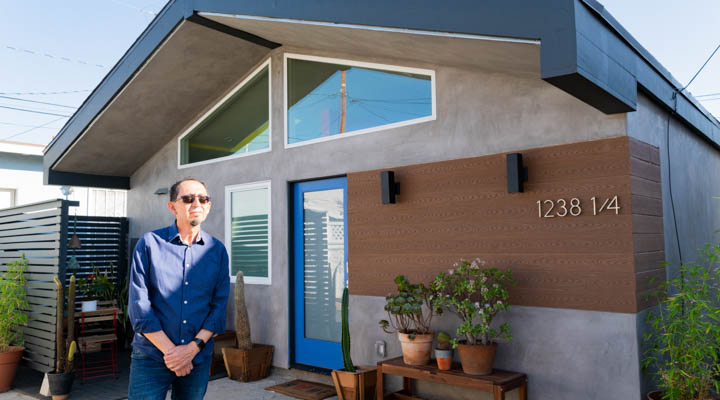 Navarro completed the look of the space by adding an extra dose of style to the ADU’s exterior. The front door is an attention grabbing blue called Dover Straits (DE5866), while Cavernous (DE6364) graces the exterior roof eaves, trim and trellis. 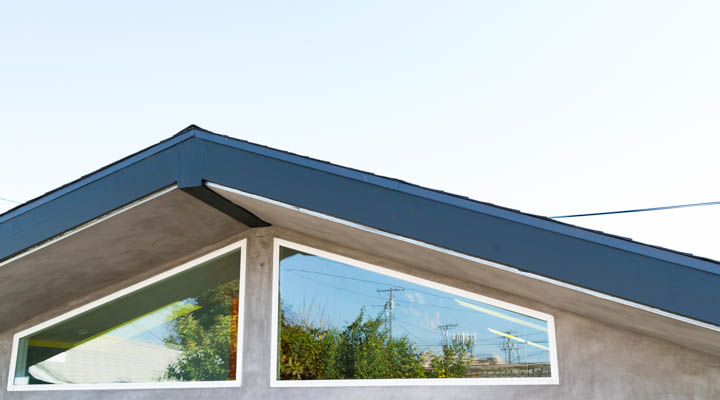 Navarro also designed the ADU with East L.A.’s blistering summers in mind, opting for concrete floors to help naturally keep the space cool alongside the skylights that open to release heat from the structure. Additionally, the abundance of light from the various skylights lessens the need for electricity throughout the day, making the unit even more efficient for its dwellers. 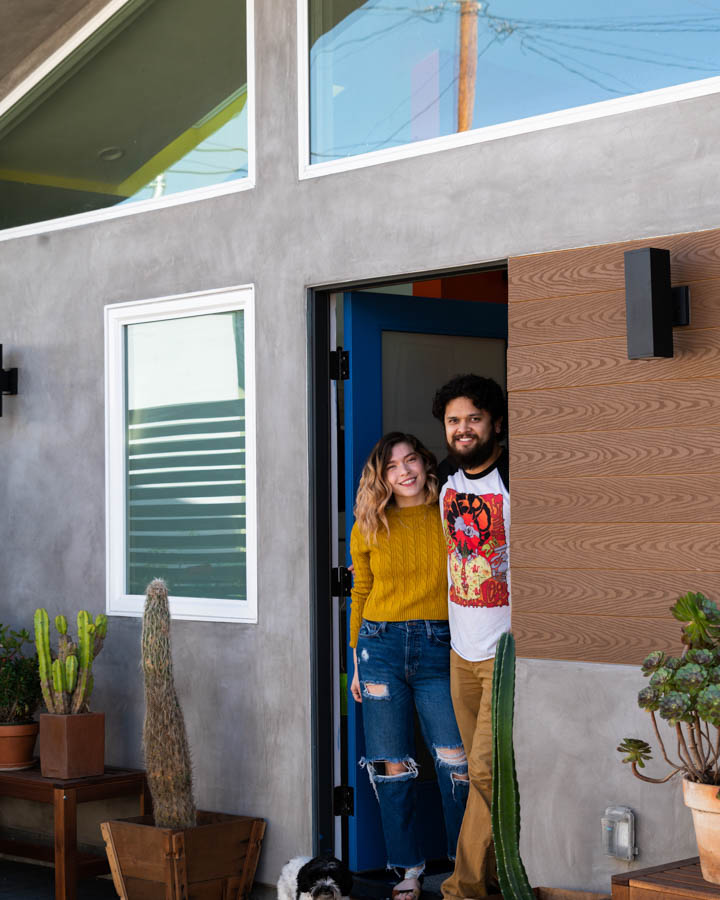 Despite offers from interested parties who were willing to pay more in rent for the property, Navarro says a young couple familiar with the neighborhood moved in and use the house as a live-work space with their dog and cat.